I own an old car. In fact, I’ve had quite a few old bangers in my time. But if you buy a cheap car, is it the ultimate money-saving hack? Or are they thankless money pits? Let’s examine both sides of the old car coin.

The case for cheap cars…

1) You can pick up a bargain if you buy used

My current car, a Honda Jazz, came from a garage that does car auctions and sells other cars off at bargain-basement prices. This vehicle was registered in 2004, so it’s pretty old, but my partner’s handy error fault reader told him that there was a problem with the catalytic convertor before we bought it. That explained the price. It was listed for £750, instead of the £1200 they seemed to be going for on AutoTrader. The MOT was about to run out though, so we asked if £650 would be accepted. It was and we drove the car home there and then.

We are a two-car household. My partner drives a newer, more reliable car and he uses his daily. I, on the other hand, split my time between home and the office. Having my own car makes life a lot simpler and I would struggle to commute to work without it. However, if we go out as a family, we always venture in my partner’s car, because it’s more comfortable and reliable.

3) It allows you to avoid finance

If you buy a used car then you’re more likely to be able to avoid finance. If you’ve ever been in debt, or if you’ve struggled financially whilst having a car on finance, then you’ll know that can finance can be a major bind. So if you don’t have thousands of pounds to lay out on a new car, then an older vehicle may provide the solution.

If you have a used car, then the chances are that the insurance premiums will be less. This isn’t always the case of course and you will need to do your research, but generally speaking, you’ll save on insurance with an older car. You may also be happier reducing your cover level to ‘third party fire and theft’ if it isn’t worth much. But again, you must check this out, as sometimes ‘fully comprehensive’ is the most affordable model. But remember, the age of your vehicle isn’t the only factor that will enable you to save money on car insurance.

5) Lots of choice on AutoTrader

There are literally thousands of used cars available, so there are plenty of options to choose between. That means that you do have an element of choice when you get your next car, even if you’re not buying brand new. You can sit down and work out what will meet your needs and find it.

6) You can drive for miles

If you manage to purchase a gem of a used car, then you’ll be able to drive it for miles, without giving any thought to the depreciating value. There is something quite satisfying about rinsing a car for miles and not caring how far you go in it, because it won’t be depleting in value.

7) Living with a car enthusiast

I live with somebody that loves cars and he’s able to fix most things himself. This made my decision to buy a cheap car one hell of a lot easier, because he can fix most issues when they arise. On the occasions where he’s not able to fix something, he’s able to gauge if a mechanic is quoting a fair price.

This is very lucky for me, because I’ve had my current vehicle for over two years and within that time the brake has buckled, it’s needed two full oil changes, the catalytic converter has failed (although we knew that when we bought it) and the exhaust has fallen off twice. I dread to think how much that lot would have cost me if a mechanic had had to fix it.

Oh and my partner has also had to rescue me after a break down at least once.

The case against buying secondhand…

As I’ve mentioned above, my old banger would have cost me a pretty penny if I wasn’t in a relationship with somebody that could do the work himself. The work the vehicle has needed since I bought it would have ran into thousands. Some car maintenance is, of course, natural and I wouldn’t say that I’ve had an excessive amount of work done on the car overall. It could have been worse, for sure. But the car hasn’t exactly been a thrifty outlay either.

2) Do you truly know what you’re buying?

When you’re looking to buy a cheap car, you’re taking a big gamble. Yes, you can look at the MOT for a list of minor faults, but do you really know what you’re buying? The owner will want a sale, so they may not disclose the full details to you.

This could be said for a new vehicle too. But statistically, an older car is more likely to have hidden faults.

Old cars can be unreliable, which causes stress and frustration. If you need your vehicle for work, then you’ll want to be certain you can jump in it and use it without issue. You can’t always guarantee that with an old vehicle.

Do you really want to be opening your door at the drive-thru because your electric window doesn’t work? Or dealing with water escaping in through the door? No you don’t. It’s one thing having a car without mod-cons, but quite another when being in your car is uncomfortable.

Of course, it is possible to get an older vehicle that doesn’t have faults that make journeys uncomfortable, but this is definitely something to consider when purchasing a new set of wheels.

5) Next stop… the scrapper

The chances are, if you decide to buy a cheap car, you won’t get to sell it on to yet another owner. So when the time comes to part ways, you’ll be calling the scrap company. This means that you’ll probably only get back a fraction of your initial investment. So if you’re looking to purchase something else, you won’t have much from your last runaround to put towards it. 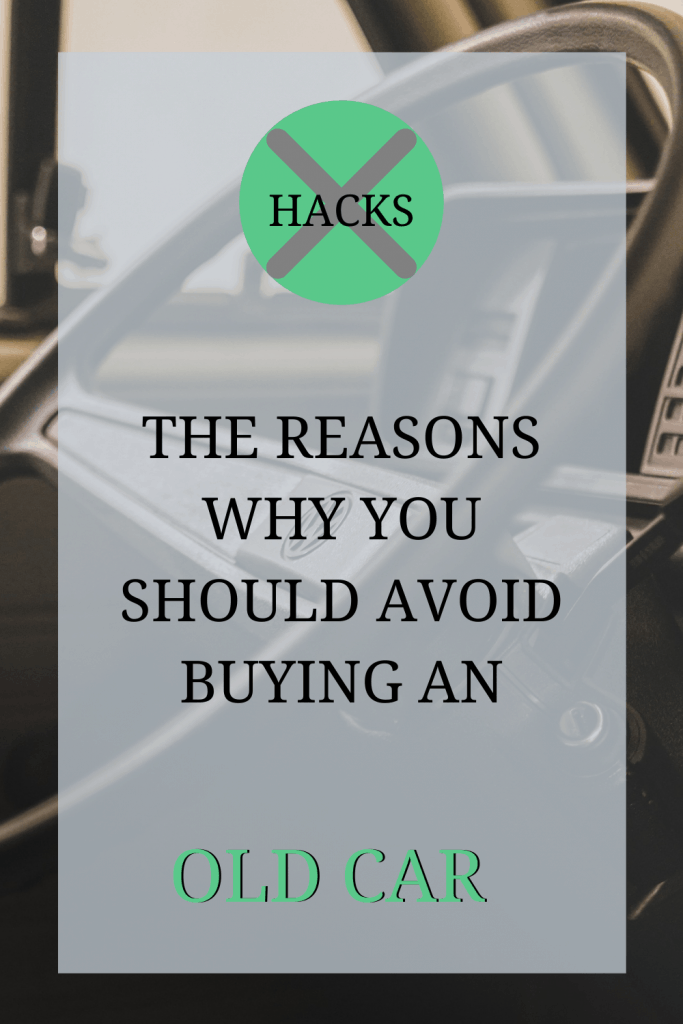 When you buy a car, irrespective of the age, you’re taking a gamble. Something could go wrong, but unless you have an interest in cars, you know what you’re looking for and you’re able to fix it if it goes wrong, I’d avoid buying anything more than five years old.

For my family, having an old second car does work, but only because I live with somebody that enjoys fixing them as a hobby. If I had to take my car to a garage every time something went wrong, then it would no longer be a cheap runaround and instead it would become a never-ending money pit.

If you’re hoping that an old car will save you money, then you may end up disappointed. In order to hedge your best, I’d consider buying secondhand, but I’d leave the old bangers alone.

I don’t think that buying an old car is a thrifty hack, so it joins jam making and matched betting as a hack that hasn’t worked for me. 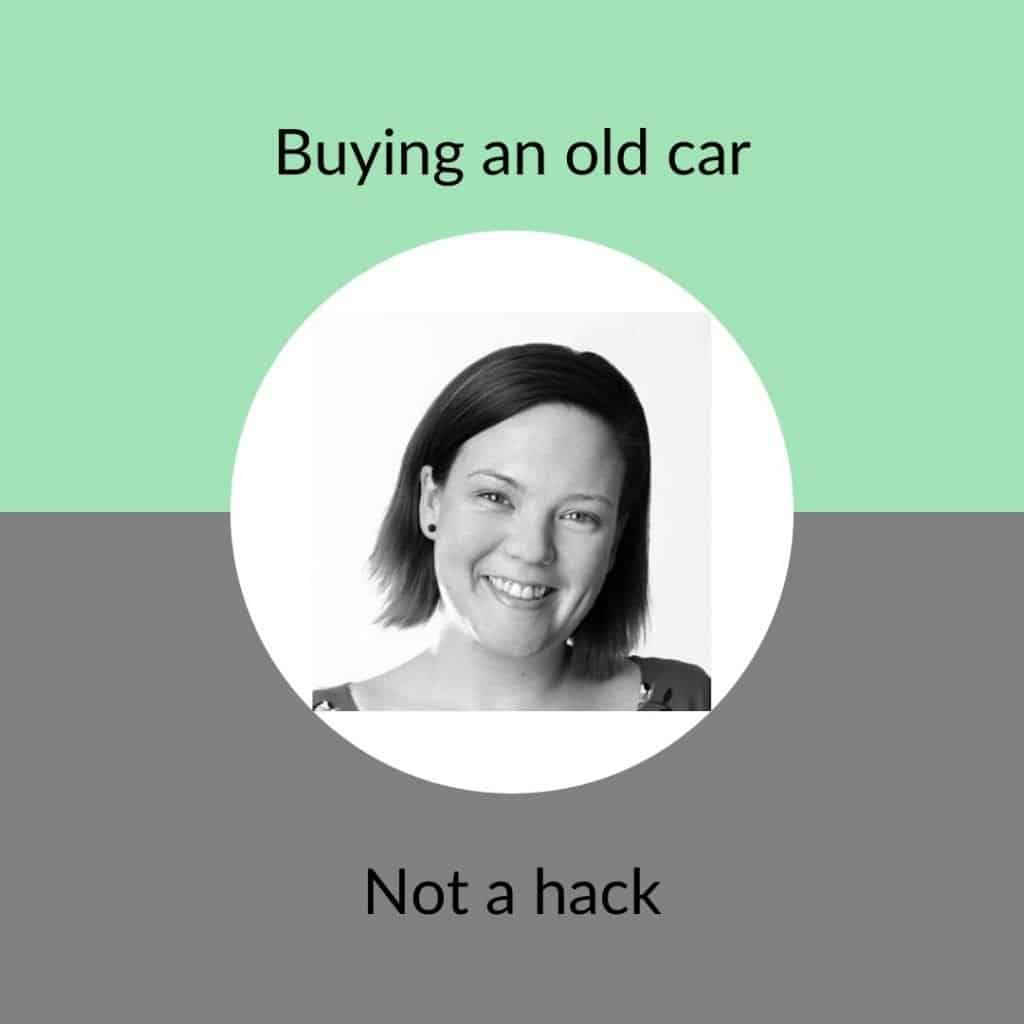