Snow globe are popular household decorations. They are used to depict miniature scenes and some people even collect them. But can you make your own snow globe? Is this an affordable craft? Here, I explain the different options that you have if you want to attempt to make a DIY snow globe.

What is a snow globe?

The snow globe tradition dates back to 1927 and most people in the UK and North America are familiar with the concept. Traditionally, they come in the form of a glass sphere, that depicts some sort of miniature scene. They usually contain water and glitter too. Or some other form of fake snow. The idea is, that when you shake the globe, it looks like it’s snowing.

Not just for kids

These ornaments are associated with children, because they’re playful. But they are actually big business and some people collect them. You can get larges ones, small ones and some are attached to music boxes.

Although winter scenes are typical, they can contain different types of scenes. From a basic snowman, to a family picture, or a popular cityscape.

I know somebody that has a collection of three that show the skylines in London, Paris and New York and that collection come out every Christmas. This friend aims to seek a new snow globe out every time she visits a new city. She sees them as the perfect travel souvenir.

I’ve also seen some unique snow globes for sale on Etsy. Some creators even create customised globes to reflect your special moments, ranging from engagement scenes to special pets playing in the snow.

As snow globes often depict memories, you may want to make your own to illustrate something that’s special to you. You can buy make-your-own kits, where you just slide in an image and add water. Often they come with some card that you can colour, but you may prefer to slide in an existing photograph. If you to this, then it will take minutes to set up.

Alternatively, you could buy a kit where you get clay to make a festive scene. I have never gone down this route, mainly because I’m not particularly artistic. But if you, or your kids are, then perhaps this is something you could look into creating.

If you are looking to create a snow globe gift then Christmas is a natural time to send it. Snow globes have a very winter feel to them, due to the snow aspect, so making a personalised one could be a well-received gift.

Last year, I made some mini snow globes on behalf of my son. They contained pictures of him on a Christmas photo shot. His grandparents, aunts and uncles loved them and have promised to get them out each year. But these thoughtful mini gifts cost less than £5 each to pull together and combined with a personalised Christmas card, they went down extraordinarily well!

If you didn’t want to purchase yet more plastic, then you could always convert a jam jar into a DIY snow globe. The one thing to keep in mind is sealing it, as you wouldn’t want the water to escape everywhere. You’d also need to make sure that the items you put inside didn’t get water damaged.

If you were worried about the water aspect, then you could make a waterless globe. It wouldn’t quite have the same impact, but it would mean that you wouldn’t have to protect your scene from water damage. You wouldn’t have to worry about leaks either.

If you’d like to create something smaller, then why not use a shot glass? The trick to these mini snow scenes is not adding too much details. You can only really fit in a small tree, a little star, or a little wooden house. They can look cute though and I have known some people to add string and to tie them to their Christmas tree. Although I prefer making personalised baubles myself, because I can fit more detail in. 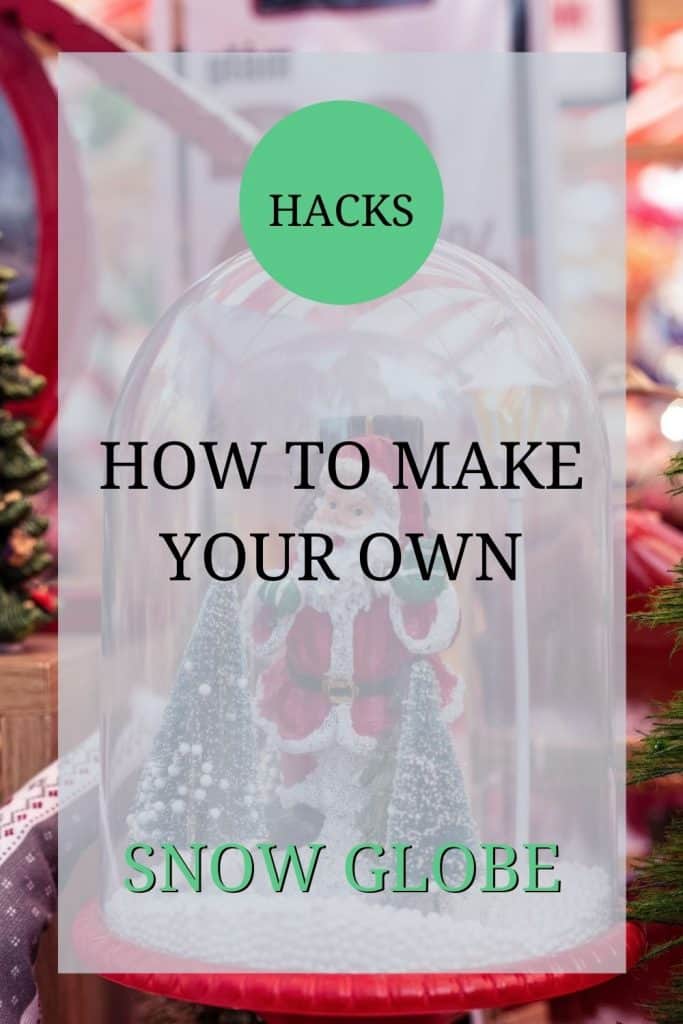 When deciding if this is something worth doing, you should have a think about why you want to make your own snow globe. Obviously, creating your own isn’t going to add any value to an existing snow globe collection, but it may be a nice way of creating a precious memory. A lot of us have photographs on our mantlepieces, so why not break it up a bit with a snow globe?

If you enjoyed this article then please check out my get crafty section for other ideas.

Hello! My name is Claire (Stapo to some) and I created Stapo's thrifty life hacks. I'm 35 and I live and work in Greater Manchester with my partner (Mr St) and our son, Arthur (aged two). Mr St and I...