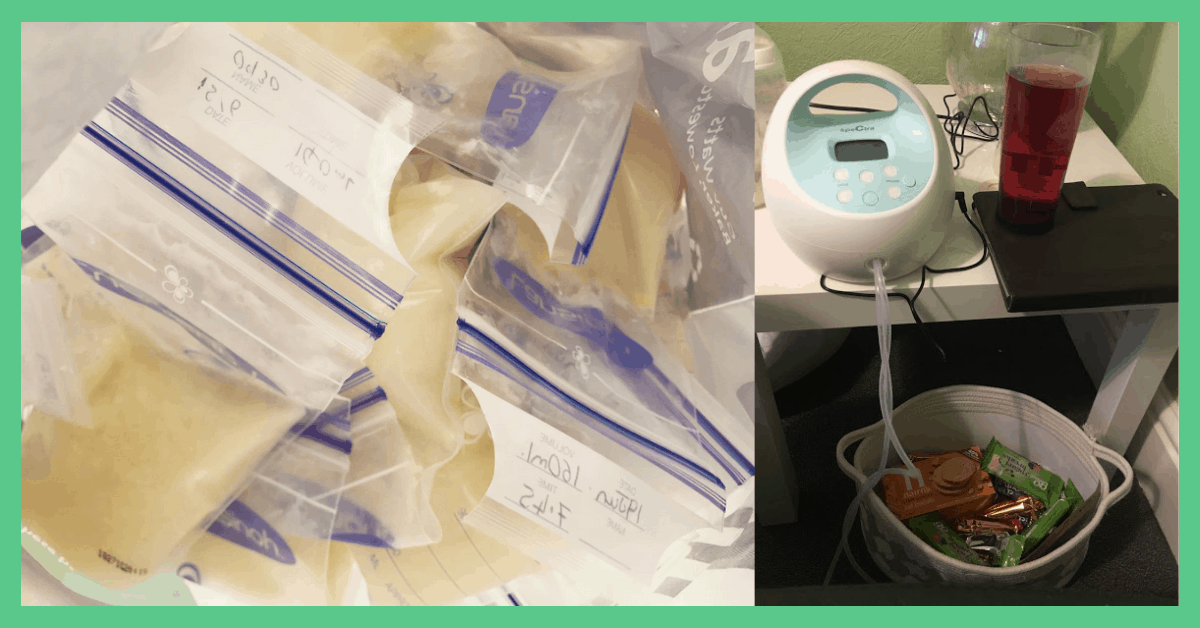 When my son arrived I became an exclusively pumping mother. That means that he didn’t nurse him directly from my breast and he didn’t drink formula milk either. Instead, I used my double electric breast pump to express milk for my baby, which he drank from a bottle.

I didn’t know this way of feeding was a possibility before my little boy arrived. I’m telling my story in case it helps another parent out there, who is struggling to breastfeed in the typical way, because there are alternative solutions available. It doesn’t have to be a straight choice between breast milk and formula milk.

You’ve heard the phrase: ‘fed is best’, but I hate those words. Fed isn’t best. Fed is a basic requirement. What’s best is a mother being empowered to feed her baby how she wants. It doesn’t matter what feeding solution she goes for, but it does matter that the decision she makes is supported.

My choice – the breast

As soon as I found out I was pregnant, I knew I wanted to breastfeed. I’m not sure why. But I felt, within my core that this was something I wanted to do.

Some people didn’t understand why I was so adamant. But I don’t understand why some mums insist on only using renewable nappies. Cloth bums aren’t my thing. I know it’s an amazing thing to do for the environment, but it’s not my preference. However, I fully respect parents that do go for cloth bums. Just like I respect breastfeeding mothers, bottle feeding mothers, combination feeders, exclusive pumpers and everything in between. In my mind, if mother and baby are happy and healthy, then all is well in the world.

So there I was, wanting to breastfeed, reading books about it and attending antenatal courses before my baby’s arrival. But of course nothing can fully prepare you and nobody knows how their baby’s birth will play out.

I won’t go into the ins and outs of what happened during Arthur’s birth. But, I was induced and it failed, so he was born via caesarean section. However, due to some previous health issues, I was in a bit of a mess. This meant that the doctors set to work at putting me back together. Sadly, it meant that I was in surgery for around three hours. During the bulk of that time, Arthur was having skin-on-skin time with his dad.

As soon as I was through the surgery, I was reunited with my darling baby boy. At last I was a mother. We had skin-on-skin time and I was able to feed my baby from the breast, but it wasn’t easy like I expected it to be.

Meeting a pump for the first time

Back on the ward, the nurse explained that if I wanted to breastfeed Arthur, I’d have to do it every three hours, so that’s what I did. But he struggled to latch, so I had my first session on the pump. I expressed milk, using the ward’s resident double electric breast pump. I would then syringe the liquid gold to my son.

During the next five days in hospital, I tried to master feeding. It wasn’t easy. I got lots of help and support though. Help that continued when I came out of hospital, when Breastfeeding Together (a local group, stepped in to help).

As time went on, it became clear that breastfeeding wasn’t going to work for me and my baby. But I really wanted to give him as much of my milk as I could. So I continued to express, trying a number of breast pump solutions.

At first I used a manual breast pump, but I realised that I wasn’t going to retrieve enough milk to feed my son full time using this method alone. I needed to find the right products to help me to collect as much milk as possible.

Electric breast pumps – how I chose my pump

I wanted to find a double electric breast pump that would help me to express as much milk as possible. I was familiar with all the usual brand names; Nuby, Medela, Lansinoh. But after reading lots of reviews on electric breast pumps and asking other ‘pumping mammas’ what model they used, I saw that the Spectra S1 Double Electric Breast Pump had lots of recommendations, so I decided to invest in one.

I knew that I’d need an electric breast pump and I liked the fact that my Spectra S1 Double Electric Breast Pump would plug into the mains, but it also had a battery for when it wasn’t possible to be sat near a plug. It also had a digital screen and it was billed as an affordable hospital-grade pump and this appealed to me.

Make sure you read as much as possible before buying a pump, so that you purchase the pump that’s right for you. It is a lot of money to pay out, but does represent good value if you end up using it  a lot.

I didn’t regret buying my digital electric breast pump and I was glad that I sought out reviews from other mammas before buying it. I have written about the baby and toddler products that I recommend, to try and return the favour and help other parents out. There are so many products available and I always found it useful hear what worked for others.

Using my breast to feed – in a different kind of way

I used my Spectra pump six times per day, for six months. Arthur only had my breast milk for the first twelve weeks of his life and at that stage, I introduced one bottle of formula per day.

It was far from easy. Pumping was hard, finding time to pump was hard and retrieving a decent amount of milk was tricky on some days as well. I kept going, but I often felt like that machine dictated my life. I kept reminding myself that it wasn’t forever and it was enabling me to give my son the gift I’d wanted to. Milk.

Arthur’s daddy had to pitch in too. Quite often he’d be feeding Arthur at 3am, whilst I was attached to the breast pump. In the day, play dates and family visits were arranged around pumping times and when I visited loved ones, I’d often escape to the spare room to express.

When Arthur got to six months, we started to wean him and at this stage I decided to pack the double electric pump away. It was a decision that I virtually made overnight. I felt that the pump had served its purpose and I was ready to leave it behind. I had a frozen stash of milk though, so Arthur got one breast-milk feed daily, between the ages of six and nine months.

When I look back on that period, if I’m being honest, I realise that I pushed myself pretty hard. I was hooked up to my electric double breast pump a lot and I put a lot of pressure on myself to produce that milk.

The double pump helped me to produce lots of milky goodness, but in retrospect I didn’t go easy on myself. I could have worked some extra formula feeds into our routine and I failed to use my manual breast pump enough. Using a manual pump would have been easier when I went to visit friends and family.

That said, electric breast pumps certainly have their place is you’re exclusively pumping and I am glad that I found a way of feeding my son that worked for me and my family.

Being able to feed Arthur my breast milk, despite not being able to breastfeed in the traditional sense, made me feel empowered and I’ll forever be grateful for the support that the midwives at my local hospital and the volunteers at Breastfeeding Together gave me. I was sent a certificate to congratulate me on giving my baby breast milk for six weeks. I remember that felt like such an achievement at the time and I still have it, tucked away in Arthur’s keepsake box.

Advice for others using an electric breast pump

So if you want to breastfeed, but it doesn’t quite work for you, then there are alternative solutions. Ask for help, speak to your local midwife, find out what resources are available in your local area and do what makes you feel comfortable.

Double electric breast pumps certainly have their place, but if you decide to get one, please be kind to yourself. Being able to use your breasts to feed your baby is important if that’s what you want, but so is your mental health. Don’t let your electric double take over your life, because pumping is not the be all and end all.

If you’re a new parent, then check out my blog sections that cover motherhood and happiness. I have also written my 11 top tips for expressing milk, which should be useful for all lactating mamas. 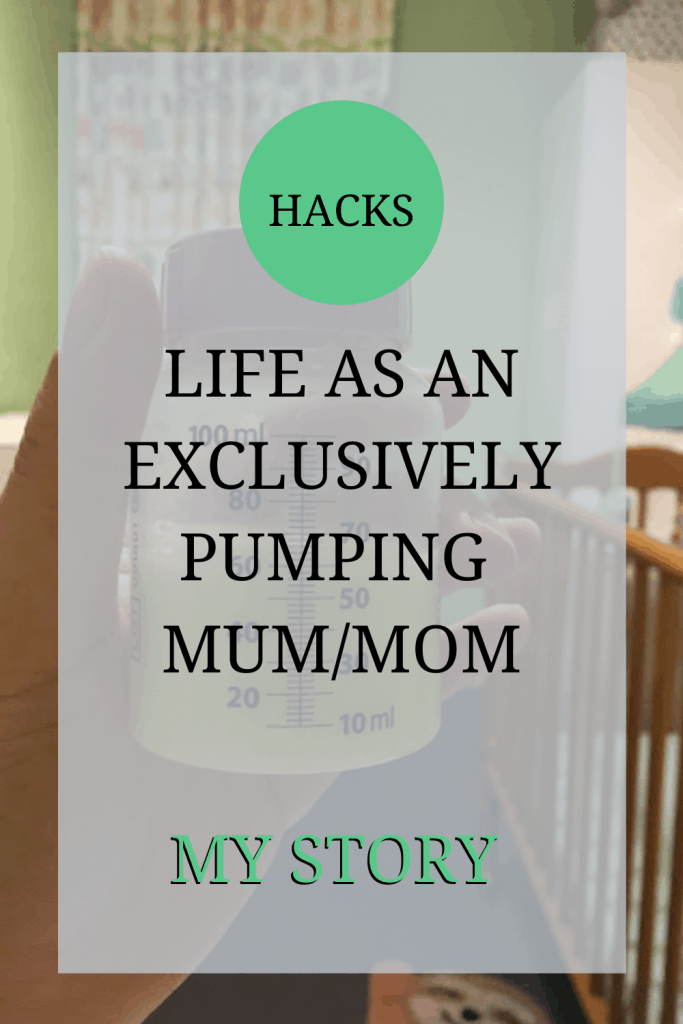 Editor’s note: This post was originally published in November 2020 and has been completely revamped for accuracy and comprehensiveness.