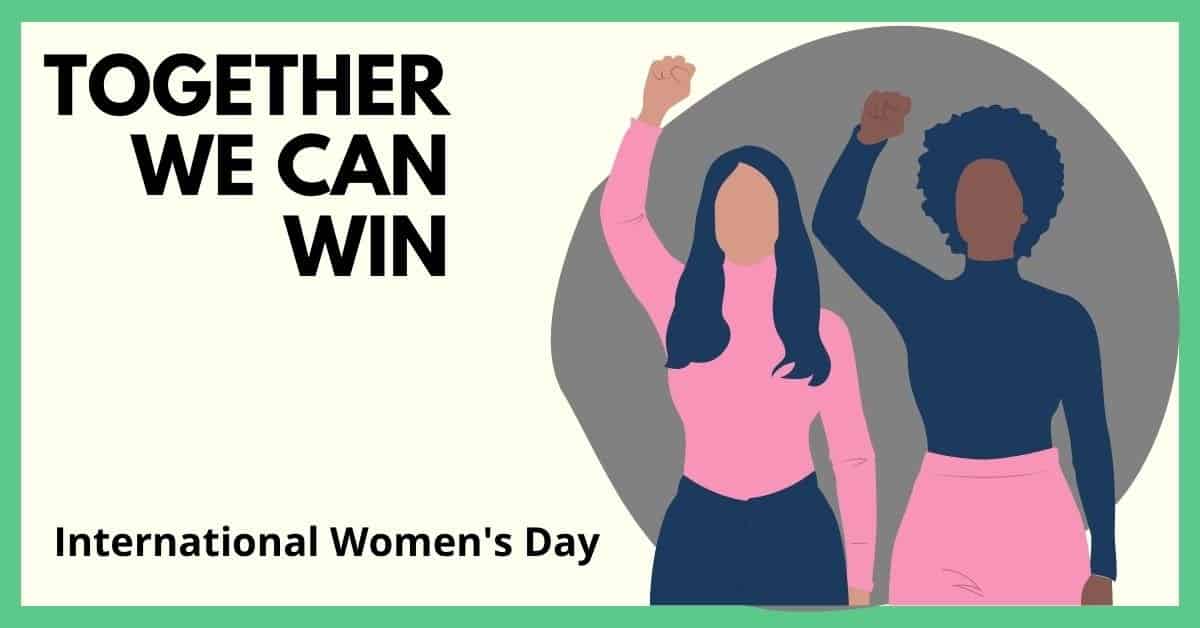 In honour of International Women’s Day, I’m going to explore 8 simple ways in which you can help to close the gender pay gap. These steps could directly benefit your finances, as well as somebody else’s.

What is the gender pay gap?

The gender pay gap refers to the disparity between what men and women are paid for doing exactly the same job. In 2017, the government published actions to close the gender pay gap, after the issue received a lot of media attention.

Generally speaking, actions to close the gender pay gap seem to be working. But it does still exist, so we can’t afford top take our foot off the gas.

According to the Office for National Statistics, the gender pay gap was 15.5% in 2020, down from 17.4% in 2019. It remained close to zero for full-time employees aged under 40, but it was over 10% for older age groups. Higher earners also experienced a much larger difference in hourly pay between the sexes.

By closing the gender pay gap, we will also help to close the gender pensions gap by proxy.

How can you make a difference?

If you’d like to help close the gender wage gap then there are tangible things you can do. It may result in you making more money and in women collectively earning a fair rate. Here are my tips for those that want to push for change:

1) Vote for women where you can

It’s important to vote. Your voice should always be heard and I would urge you to consider voting for female candidates where you can.

Women serve as heads of state or government in only 22 countries according to UN Women and in the UK, only 34% of MPs are female. This is the first time that female representation in the UK has been this high. But there is still room for improvement and how can we expect issues that impact women to change, if women aren’t proportionately represented in the decision-making room?

Of course, some men also feel passionate about closing the gender pay gap. But women in positions of power are probably more likely to prioritise closing the gender pay gap. If you’ve experienced the effects of sometimes, you’re more likely to care about it. That’s just human nature. So with that in mind, think carefully about who you’re sending to parliament to fight your cause.

If you’re passionate about closing the gap and ensuring that everybody is paid a fair rate, then you need to start talking and sharing details of what you earn. Did you know that your employer can’t stop you from telling your work mates? They might claim that it’s confidential information, but you’re not being unlawful if you decide to have that chat. The Equality Act 2010 states that ‘making or seeking to make a relevant pay disclosure’ should be treated as a protected act (which means that you can’t discriminate or punish somebody that does it). If it says you can’t talk about your salary within your employment contract, then the clause is actually unenforceable.

I understand why people tend to swerve this discussion and talking about wages can lead to feelings of resentment. Especially if you’re the person receiving less for doing the same.

But remember, pay secrecy and pay inequality tend to go hand in hand. There may be a valid reason why you’re receiving less, but you deserve to hear what it is and you deserve the opportunity to find out what you have to do to get more. Fundamentally, if everybody is being paid fairly, then what’s the big deal? If the pay structure is fair, then having ‘that chat’ may shouldn’t make a jot of difference and if your employer is uptight about this issue, then you’ve got to wonder why.

When it comes to closing the gender pay gap, it’s imperative that you know what you’re worth. This means that you have to gather as much intelligence about pay scales as possible and be aware of tax year changes.

As well as chatting to colleagues about what they’re paid, you can check Glassdoor. Look at job adverts too, so you can determine pay scales. You can also speak to people working in the same area as you. If, for example, you write a lifestyle blog and a brand approaches you asking for your rates, find out what others are charging.

It is not a race to the bottom, or a competition to see who can do things for the lowest amount. So gather your intelligence so you know that you’re being paid a fair rate.

Remember, we all go to work to earn a wage and it’s only right that you’re paid fairly for the job you do. Also, if you shy away from conversations such as this, then you may start to feel resentful.

Even if you don’t get the rise you were hoping for, at least the concept will have been discussed and hopefully you’ll get a road map to a rise.

By doing this, you’re showing that you’re not prepared to be overlooked. Nobody else is going to fight your corner, so you need to advocate for yourself. 5) Use your power positively

If you’re in charge of hiring somebody then make sure you pay your employee what they’re worth. You should also offer extra where you can. Think back to when you worked a job and you weren’t paid fairly for what you did. Good people deserve to be compensated fairly, so don’t try and save a few pounds just because you think you can get away with it.

I remember speaking to an internal recruiter about a job I’d applied for. She asked me what wage I expected and I said: “around the £18-£19k mark”. I knew this was a conservative amount for the job I was applying for, but I wanted the position and I stupidly quoted the lowest wage I would be willing to accept. Lucky for me, the recruiter said: “with your skillset, you should be going in at £25,000, minimum.” So when the interviewer asked what my salary expectations were, I said £25k and I got £25k! I very nearly diddled myself out of £7,000 per year, but that (female) recruiter saw an opportunity to help me and she seized it. I’ll always be grateful to her for that.

Sometimes women are too scared to state their worth. This perpetuates the gender pay gap. So if you want to help close it, help a women out if you see her undervaluing herself.

6) Upskill and encourage other women to do the same

You should consider upskilling and completing additional training wherever you can. If your skills are sharp then you will feel confident to get the pay you deserve.

Some women have breaks from the workplace (to have children, for example). There’s a chance that break could impact on your pay. With that in mind, it is important to develop your knowledge whenever you get the opportunity to do so. You should encourage all the women you know to do the same.

7) Challenge sexism in the work place

Unfortunately, sexism and misogyny is still an issue in the workplace and it’s imperative tackle it head on.

I once challenged a male colleague that made a sexist ‘joke’ about a female colleague. I told him that his behaviour was unacceptable. Directly, in a considered way, after I’d asked him for a private word. Did my words change that man’s attitude? Sadly not. But collectively, if we call things like this out, then our words will sink in. Together we have power.

Here’s the thing, if women are belittled in the workplace, just for existing, then their achievements are being undermined. That’s not right and it may lead to unconscious bias when projects and responsibilities are being dished out. So by calling out sexism, we are doing our bit to push for change.

8) Make this an issue you care about

To quash the gender pay gap once and for all, we need take an interest in it.

Employers with 250 or more employees have published their pay figures, comparing men and women’s average pay across the organisation and you can search and compare gender pay gap data. See how your company is faring and call them out if they’re not performing as they should be.

When you’re looking for a job, try to seek out a business that doesn’t have a gender pay gap. Champion those that are doing things right. If that’s not possible, then champion closing the gap from the inside. 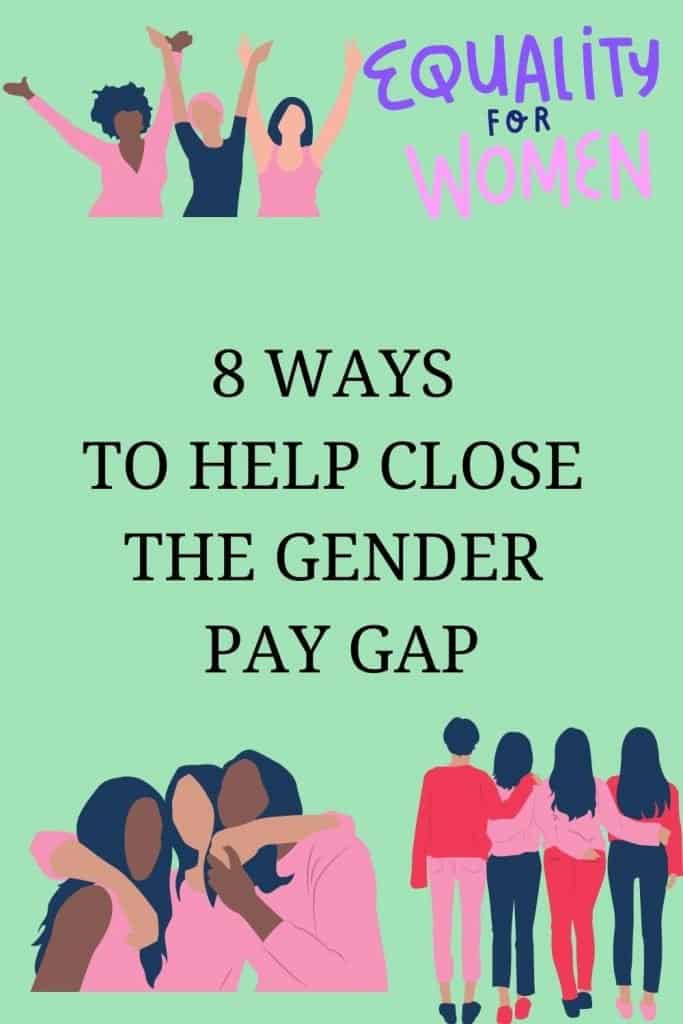 Doing what we can to close the gender pay gap is important. We all have a part to play and collectively we can create a gender equal world. One day at a time. If you don’t think you are affected by this, that doesn’t mean others aren’t. In your privileged position, support other females where you can.

If you enjoyed this article, then you should check out these posts, which have been penned by other UK money bloggers:

My Love Letter to Women for International Women’s Day 202